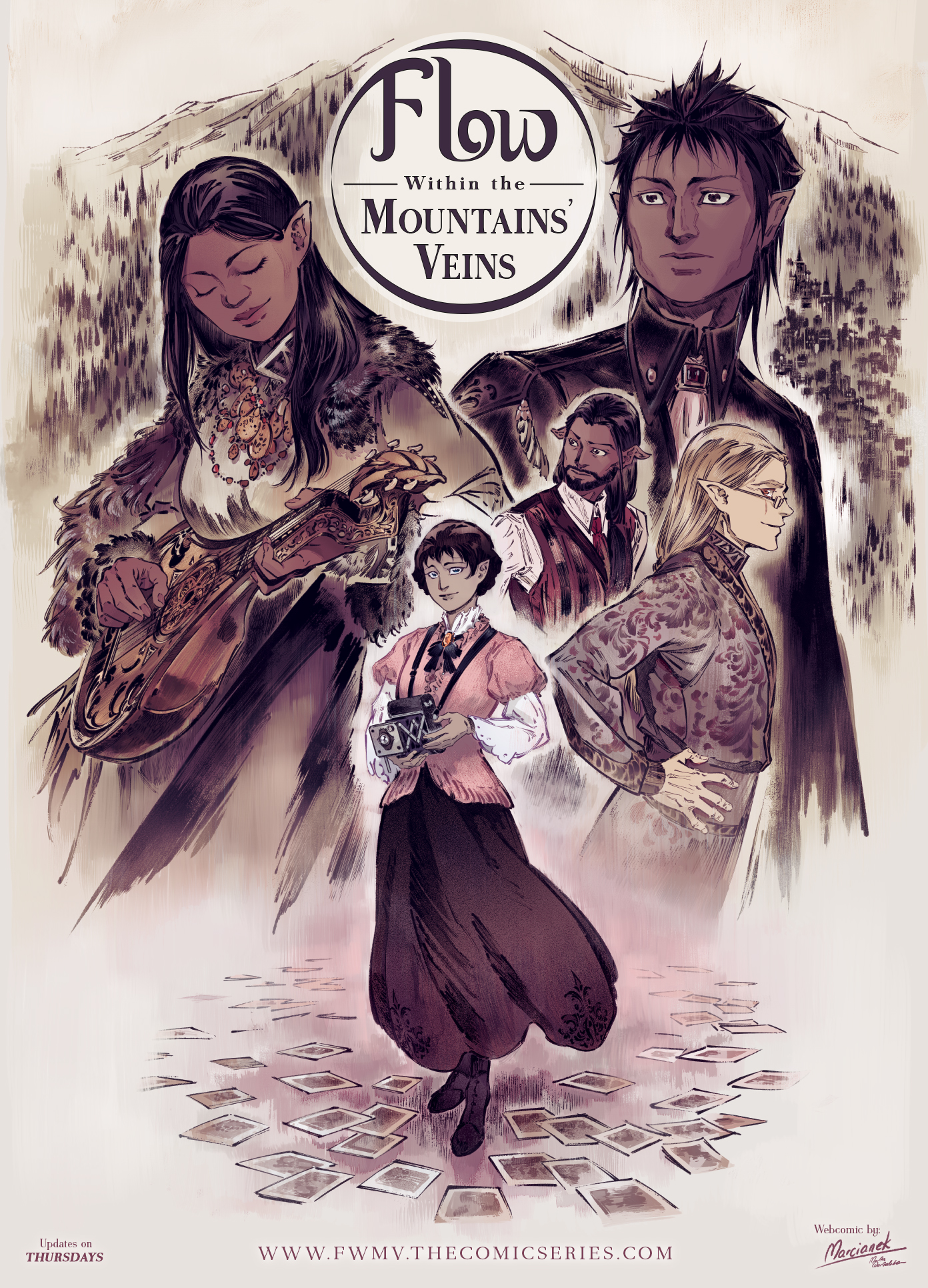 A world in which two races with vastly different lifespans coexist will inevitably move at an arrhythmic pace.

But to say it only does so through the actions of a few great individuals - the instigators, the heroes, the conquerors, the destroyers, those gifted with the power to turn the tide of history - is not entirely true.

There will always be infinite, tiny, seemingly insignificant existences who, in spite of their smallness, have just as big a role in weaving the pattern of their reality.

Driven though they may be by something as simple as trying to make sense of one’s self, or discovering where one belongs, they too are a resounding part of this world.

This is their story.

UPDATE: Hello everyone! I'm Marcianek, and I'm another SmackJeeves' refugee! I have finally found time to start uploading me webcomic here!

To my old readers, I hope you've managed to find me here through my announcements on SJ and on Twitter(Well, you most likely did, since you're reading this XD). Glad to have you back, thank you for your patience, and apologies for the inconvienience! Smack Jeeves really messed up, not even bothering to redirect the old links to the new profiles, no doubt leaving many people confused whether their favourite comics were suddently deleted, or if something else happened.

To my potential new readers, hello! I hope this webcomic will be up to your taste. It's a long form and slow paced fantasy slice of life with a focus on daily lives of craftsmen, artists or in general people who are troubled products of their society.
It's divided into a few stories, each with their own cast and main characters, and we are currently on the first one. This image is a Poster/General Cover for my webcomic featuring main characters for each separate story!

Normally the schedule for this webcomic is 1 page per week. But since I'm moving everything from SJ, I'll gradually upload few pages a day until they catch up to the planned release date for the Chapter 1 final pages, aka until December 26th!

For the old readers, this will mean that there will be no new page on 19th of December (The updates on SJ will be discontinued), but I hope to make up for it by posting bigger sized pages than I used to on SJ prior to its update - they are about 25% larger than they used to be...and definitely wayyy larger than the new strict SJ limit allows xD

So I hope rereading this webcomic will be a slightly different and still enjoyable experience, now that more details are visible. :) (also I have to admit, this is partly my petty way of lowkey rubbing it into the face of the newSJ's and their 690px width limit lol.)

That, and obviously that means there will be batch update of new pages on 26th. :)


Sadly, once all of the Chapter 1 pages are uploaded, the comic will go on hiatus until spring, so that I can work on Chapter 2.

This is more of an announcement to the potential new readers, since I've planned and mentioned this on SJ for a long while now.

Because I've planned this hiatus, I didn't see a point to make a move yet, even though I knew about the SJ update approaching - and even hoped it won't be so bad. However things turned out...well... very, very bad, I'm sure by this point everyone knows the story to some extent XD

So, in the end, here I am! Again, hello and I hope you'll enjoy "Flow Within the Mountains' Veins"! :D

If you'd like to know a bit more about the story, I'll prepare "About" page as soon as I can.
I also invite you to check out old art, concept sketches and other stuff related in the comic's dedicated DA folder <3

This does look fine!

Yasss! Godspeed and good luck with everything on the new site!

I’m in based on this page alone.

The web address you left over at SJ brought me here, thank you very much.